Posted on September 2, 2016 by Andrew and Meghan

After an evening of camping in Koke’e State Park, we woke up early, along with the roosters crowing around 5:45AM or so. This was partly due to jet-lag, partly due to excitement of vacation, and partly due to wild crowing roosters! Just so you’re aware, there are wild roosters and chickens all over the island, so if you do happen to have a weird fear of them (Alektorophobia… apparently it’s pretty common), then don’t come to Kauai. Or stay on the manicured resort properties… and even then, you still may see them. Apparently, Hurricane Iniki tore through in 1992, destroying (among many other things) chicken coops. The result was a prolific number of wild roosters and chickens which can be found on all parts of the island. Regardless of our early up and at ’em causation, we packed up our tent and dined on guava rolls, peanut butter, and fruit, before heading up the rode from camp towards the Pu’u O Kila Lookout. As mentioned in a previous post, Pu’u O Kila Lookout is the end of the line on this rode.

There were originally plans to connect the highway here so that a road would circle the entirety of Kauai, but those plans fell through for various reasons and as rumors have it, the locals are happy with that failure. While a road connecting the entire island would be easier for tourists to get around, it would also take away some of the beauty of the Na Pali and Koke’e areas that are more wild, scenic, and less accessible areas of the island. 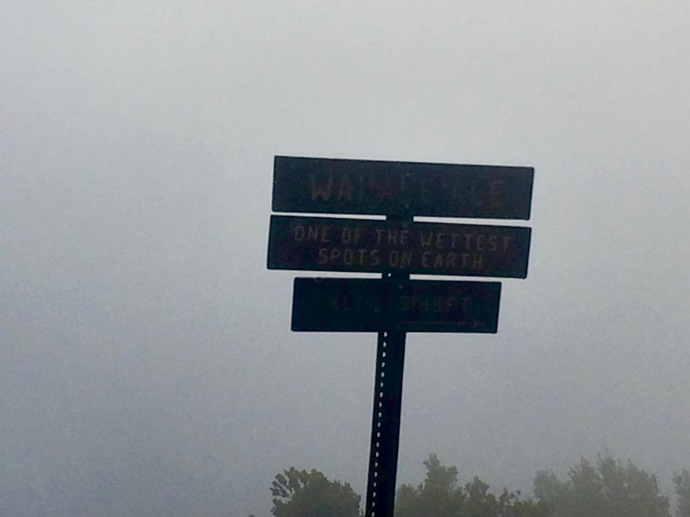 The Pihea Overlook trail starts at the Pu’u O Kila Lookout, where a sign reads, “One of the wettest spots on earth”. The picture above (and throughout this post) are a testament to that sign- we had overcast and drizzly weather the whole time we hiked (although there did seem to be some efforts by the sun to try and pierce those clouds, albeit, unsuccessfully). To access the trail, park in the lot by the Pu’u O Kila Lookout. It’s hard to miss, as it’s the very end of the road. As everywhere, use common sense, and don’t leave valuables out in the open in your car while you’re hiking. There is a bathroom there, but you’d be wise to fill up on water before you get here. At the end of the lot there is a ramp leading up to the overlook as well as a sign for Pihea Trail. Walk up the ramp and check out the view (if there is one) and that’s where you will see the sign proclaiming how wet it is here. The elevation is around 4000 feet or so. Before you get up to this “vista” (which is gorgeous when there are clear skies– see below as a reminder of what we saw the day before)…

View from the previous day.

you will see a sign with the distances to Pihea Overlook (about a mile, but we clocked it closer to 1.5, since we ended up turning around a mile in due to trail condition), Alakai Crossing, and Awaikoi Camp. Alakai Swamp Trail is another great trail that is supposed to be fantastic for birding. Anyway, you will see the sign and directly to the left of it is what appears to be a little trail leading off into the ferns. This is a false trail. You will noticed a little arrow has been etched into the sign (circled in our picture) which points left. Skip this “faux” trail and keep going as the arrow indicates to get to the Pihea Trail. 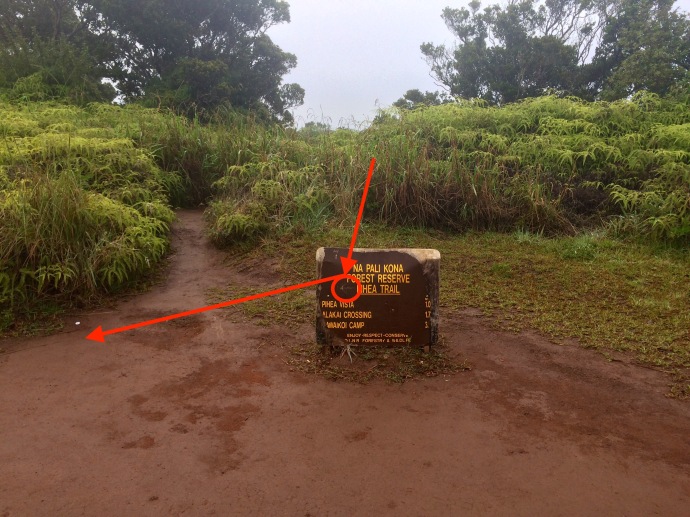 Take note of the etched in arrow pointing you the right direction.

The trail runs you across the ridge, up and down, through Ohi’a trees, ferns, Koas, and other native plants. There are also a few boardwalk areas. Generally though, the trail, especially after rain, is super muddy and slippery. Make sure you take your time and even if it’s overcast, enjoy the serenity. When we went, there had been some rain the previous night, which I think exacerbated the slippery and hazardous nature of the trail. I have seen plenty of other pictures showing the trail much drier… so just make sure you are aware of your surroundings. If you do happen to have clear skies for this hike, you will be greeted with a huge number of panoramic views of the valley and not so far off Na Pali coast. There are plenty of boulders to climb up on the sides of the trail in different areas to get a better look, but be aware of your feet- you could easily fall to your demise.

Some planks help elevate you.

Can you find Andrew?

Also be aware of spiders as you hike, especially if you’re hiking early in the morning. I read a few articles about crab spiders which were introduced to the island to try and control a bug problem on crops (it failed) and the result is a large number of small and annoying spiders that will apparently bite you and irritate your skin (no lasting harm). We talked to one local who said the best way to avoid them is to hike with a stick that you can just wave in front of you as you hike. While we were fortunate not to have any run-ins with crab spiders, we did find a gorgeous web that was outlined with water droplets… which we wouldn’t have been able to find if we hadn’t taken our time. About a mile on down the trail (there are small metal mile markers on the right-hand side of the trail as you hike towards the overlook), we realized that conditions were just getting worse and worse. On top of that, we ran into a couple that told us they had fallen three times and getting to the overlook was pretty impossible. So, after hiking a few more minutes, we tucked our tails, called it a win, and turned around.

On the way back to the trailhead, we ran into maybe 2 other people- one hoping to make it to Alakai Swamp (endemic bird species that can’t be found anywhere else in the world) and another who’s husband had ditched her already because of the deteriorating path. She hiked a few minutes more and then we saw her again as she zipped back up the trail. The hike back to the trailhead may have been a bit slower than the way out because it was mostly uphill and there were several ways to ascend the different rocky areas, but it was great to be outside, the temperature was mild, and the feeling was serene after being cooped up on a plane for the day prior and coming from a summer of work! All in all, we had a very enjoyable hike and would definitely do it again. While it would have been perhaps more rewarding if the weather were calmer and clearer, it was still a nice morning exercise bout.

The overcast weather gave the trail an eery feel 🙂

Insider Tips: Bring water with you; wear hiking boots (sneakers won’t cut it if there’s any mud or it rained recently); you gain about 250 feet on Pihea Trail (about 100 or so going to the Pihea overlook). It might be helpful to bring a long-sleeved shirt with you if you go early because it was chilly. In addition, to avoid the crowds, go early. We starting hiking around 8AM and stopped to meditate in a big clearing on top of the ridge a little ways down the trail. When we returned to the trailhead, maybe 1.5 hours later, the parking lot (which had one other car in it when we arrived) was full of cars, with people getting ready to hike or check out the overlook. Also, don’t forget to look for wildlife in the parking lot. You might see this little guy:

Red-crested cardinals have bright red heads and crests. They were introduced to Kauai.

That’s all for now. See you next time for a post on camping in Polihale.