One of the last times we went to Indonesia, we took the opportunity to travel over to Kalimantan (north of Java) to visit Tanjung Puting National Park. First, here’s the flight path we took from Jakarta to Pangkalanbuun Iskandar:

I’ll reserve another post to talk about flying over to Kalimantan. It was an experience in itself that involved walking down a highway outside of Jakarta, getting a free taxi ride, and a tiny airplane. 🙂

Tanjung Puting National Park. The park was originally designated as a game reserve in 1935. It wasn’t until 1982 when the national park was established and even since then it has had questionable protection mostly due to Palm Oil plantation in the surrounding lands (deforested areas). Nonetheless, it does remain wild and natural. The park consists of over 1100 square miles of area including the rivers that weave their way through the park before flowing into the Java Sea. Tanjung Puting is filled to the brim with wildlife, including multiple species of monkeys, gators, and a multitude of birds. It is most well known, however, for its Orangutans, made famous by a rehabilitation center at Camp Leakey. The orangutans, displaced mostly by the palm oil expansion (through deforestation), are nursed back to health and taught how to function as wild Orangs, before they are gradually re-released into the wild. 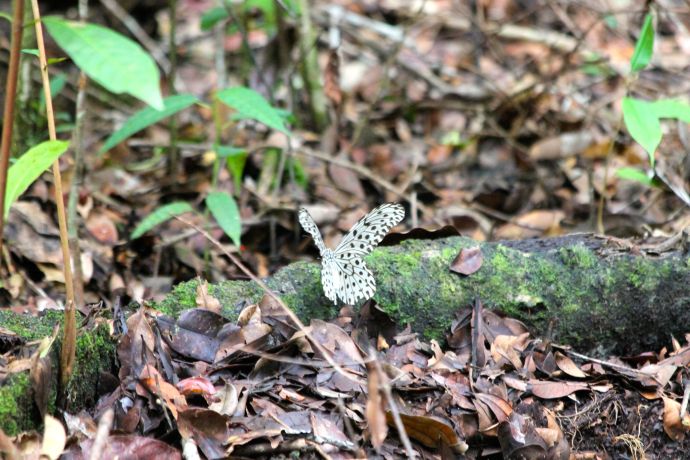 When you go to visit Tanjung Puting, you need to have a hired guide. This guide typically includes a boat (the only real way to explore the park). There are a multitude of services online that offer tours of the park for varying lengths of time. I must have spent weeks/months scouring through different tour services that sort of seemed sketchy or seemed really sketchy. After a multitude of emails back and forth with different options, I finally gave in and just booked with a company that would allow us to do a 2n/3d trip into the park. We were set to meet them at the airport and go from there.

Our boat was a traditional Indonesian boat similar to the boat we took in Flores to Komodo National Park, just a bit bigger. Our “area” was the top floor of the boat where there was a bed and mosquito net, a table with chairs, and some lounge chairs out on the deck. The bathroom was a flush toilet on the first floor– where the contents are flushed to is another story and a another mystery for another day. We met our crew and spoke with the tour operator- a woman and her husband run the business. Our tour guide for the trip was a young guy, maybe 18. He showed us around helped us get comfortable. 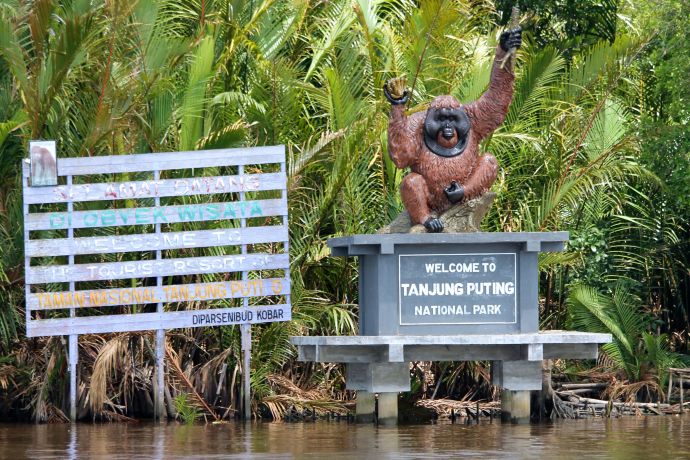 For the next 3 days, we were immersed in the park and all it had to offer. Our tour guide talked to us about the difficulties of finding jobs in the local economy; trying to choose between acting as a tour guide in the part (few jobs) versus perhaps getting a better paying job in one of the palm oil plantations that were encroaching on the park. Our tour guide’s family was in the Orangutan business, so our tour guide was too. He worked at Camp Leakey, rehabilitating Orangs… bottle feeding them, rocking them, teaching them to look for food, and eventually helping to release them into the forest. Once Orangs are released, they work their way from platform station to platform station… working their way deeper into the forest.

We spent our days traveling to three platforms. The boat would dock and we would hike into the woods where some make-shift wooden benches were set-up for viewers. There were quite a few boats out on the river during our time in the park, but we never felt crowded. We were in our little oasis, taking pictures of monkeys and trees and birds. The forest was HOT. We were sweaty after only short hikes out to the platforms. We waited with baited breath while the park rangers brought out bananas and coconuts and called for the Orangs. As a part of the rehabilitation process, the Orangs are given varying amounts of food to help supplement their normal wild foraging. We held our breaths while Orang after Orang- moms, babies, and dads came out of nowhere. They walked right next to us, they swung from branches and limbs, they climbed trees, they sat on the platforms, and they ate. It was awesome! 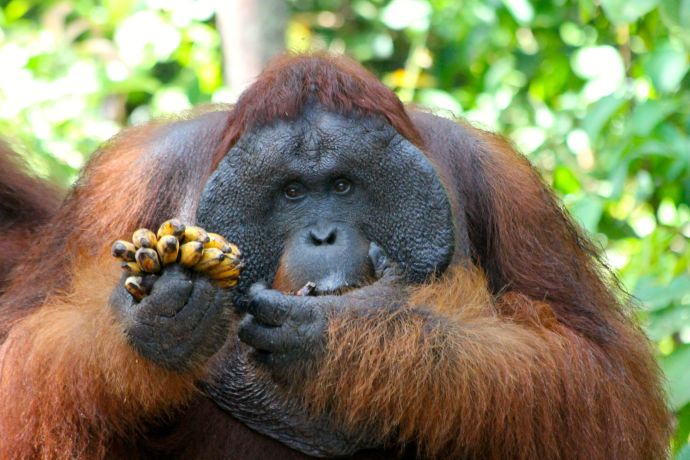 After each platform feeding time, we made our way back to our boat where our cook and guide set out cold drinks and snacks to re-energize us. We ate our meals in the wilds of Tanjung Puting National Park, on a small boat, surrounded by wildlife. At night, the boat was tied up anywhere along the river– wherever there was a spot and a tree to tie up to… we watched the stars and reflected on how fortunate we were to be able to be in that moment. We slept on the little mattress on the top deck, covered in a mosquito net, but open air. It was hot and we sweat through the night but it was so so worth it. If you ever get the chance, you should go. Just go and see what the big deal is… it changes your life.

When we eventually left the national park, three days later, we were in awe. We had seen and experienced so much. We reminisced about the previous day, when we had a Orang walk right past us on the trail. Then, when we were getting back on the boat, we snapped photo after photo of Orangs hanging on the docs and one Orang in particular that seemed to be playing with one of our crew. The Indonesian word for Orangutan is pronounced- “Oh-wrong-hoo-tahn” which means people of the forest. Indeed they are, indeed they are…

I remember reading Trip Advisor reviews of trips into the park much later, after we had returned to the states. I laughed and shook my head at people who left reviews like, “well the wine selection was mediocre at best on our boat”… honestly, if you are traveling to Tanjung Puting and your concern and thoughts are based on the wine selection, do me a favor, and don’t go. Stay at home, go out for an expensive bottle of wine in some stupid fancy restaurant. Leave the wilds of Indonesia and the graces of Orangutans to the people seeking adventure, to become one with nature, to be present in the wilds of the national park, and to experience Orangutans for what they are- people of the forest. A trip to Tanjung Puting National Park will change your life. You will understand just how small you are in this huge, huge world. It is a place for contemplation, reflection, and appreciation. If you are a wild one at heart, then please, please go to Tanjung Puting National Park. Go, experience the world and the pure awesomeness that the park emanates. If you want wine and creature comforts, stay at home, read this blog post, and take a look at the pictures of the Orangs. You have no place in the wild.

Just two buddies hanging out in a tree